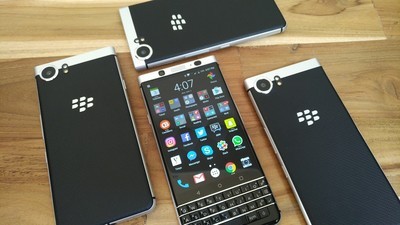 While most smartphone brands are always looking ahead to their – or their closest competitor’s – latest innovations, some have decided to look back into their history and re-release (in a more or less updated form) some of their most successful models. We take a look at two brands which dug into their past to try and secure a future.

Last year we had a Nintendo Entertainment System (NES) Classic Edition console and a teaser for a flip Motorola smartphone which, apparently, was never more than a teaser. This year, though, two brands with a notable past decided each on to bring back one of their most iconic phones: Blackberry released the KeyOne with some inspiration from their classic 9900, while Nokia went even further into the past to release a new edition of the Nokia 3310. Yes, that’s right: THE Nokia 3310. Let’s take a look at each of these two models to see what they have to offer and if they are viable in 2017, as they were in their prime.

In an attempt to regain a long-gone dominant position in the smartphone market, Blackberry (now licensed to Chinese manufacturer TCL) decided to release a new smartphone with a mix of new and old: Blackberry KeyOne features the same QWERTY keyboard and general design of the brand’s “golden age” smartphones, but with some welcome and necessary updates: Android 7.1, Snapdragon 625 chip, 3GB of RAM, 3505mAh battery and two decent cameras (12MP and 8MP respectively) as well as all the security features we have come to expect from the company.

Nokia 3310: not much has changed, really

In Nokia’s case, now licensed to Finnish independent company HMD Global, the question was how to update one of the most iconic smartphones ever built – and still one of the all-time best sellers – without it becoming something completely different that would not be suitable for the 3310 name? The answer was to change a few things but try and keep the spirit alive. So let’s see: a 2.4” TFT screen, 2MP camera, Bluetooth, a thinner and rounder frame and 16MB of storage. Yes, you read it correctly: 16MB, not 16GB. But hey, at least you can add a 32GB MicroSD card! Oh, and did we mention mp3 ringtones? And a new version of “Snake”? After all, it wouldn’t be a 3310 if it didn’t include the classic game.

Verdict: are these throwback phones worth it?

With GPS, Infinity Screens, Live Photos, and everything else that has become part of our everyday lives, most of us can hardly conceive a so-called “smartphone” that doesn’t have at least two of the features mentioned above. So, where exactly do these two throwbacks fit in the current market? Blackberry’s struggles to regain a glimpse of their former glory have been the subject of much debate and, as much as both KeyOne and the Priv are very interesting and effective phones, Blackberry has clearly fallen behind the top players in the mobile market and it doesn’t seem they will be able to turn the tide in their favor.

As for Nokia, an even smaller shadow of its former self, this new 3310 will hardly turn in the numbers needed to reverse the company’s diminishing influence, which became even more apparent after the end of their partnership with Microsoft for the Lumia devices. Perhaps the new 3310 will find some market in nostalgic collectors/fans, parents looking to give their young children a simple phone for basic communication or to the small percentage of people who (still) prefer to stay away from smartphones…

This website uses cookies to improve your experience while you navigate through the website. Out of these, the cookies that are categorized as necessary are stored on your browser as they are essential for the working of basic functionalities of the website. We also use third-party cookies that help us analyze and understand how you use this website. These cookies will be stored in your browser only with your consent. You also have the option to opt-out of these cookies. But opting out of some of these cookies may affect your browsing experience.
Necessary Always Enabled
Necessary cookies are absolutely essential for the website to function properly. This category only includes cookies that ensures basic functionalities and security features of the website. These cookies do not store any personal information.
Non-necessary
Any cookies that may not be particularly necessary for the website to function and is used specifically to collect user personal data via analytics, ads, other embedded contents are termed as non-necessary cookies. It is mandatory to procure user consent prior to running these cookies on your website.
SAVE & ACCEPT